The 6.5 Kurz by Floyd Getchell

Not another AR-15 Round!

Why would anyone design another AR-15 round? The answer is obvious to some and will be obvious to you by the end of this article.

6.5 Kruz has been designed for several reasons;

First, the cartridge is designed to overcome the feeding and extraction issues that have plagued the AR-15/M16/M4 Family of Weapons since they were created and nearly every modification to the Family of Weapons, as in the forward assist, piston driven actions, etc. has tried to overcome. The jamming problems are not with the weapon system itself, but with the cartridge selected. The .222 Remington Magnum that .223 Remington and 5.56 NATO are based on for the AR-15/M16/M4 Family of Weapons, is a bolt action rifle cartridge not designed to function in semi- and full-automatic weapons in a high use, high dirt environment like one would encounter in combat. The cartridge has a relatively straight case wall, unlike the two previous cartridges designed for assault rifles the 8mm Kurz and 7.62x39mm Russian that both have tapered case walls. See Fig 1. The taper to the case wall negates, to a greater degree, the presence of dirt and carbon in the chamber and on cartridges during loading and extraction, making the weapon system more reliable. The AK-47s reputation for being more reliable than the M16 is NOT from the design of the weapon system, but from the cartridge that the weapon system uses. The military can to a certain degree permit unreliable firearms as a fire team can support individual weapons malfunction, however an individual firing in a defensive situation must have a more reliable cartridge and firearm in a life or death situation where no support is available. Cartridge reliability was a major concern during development of the 6.5 Kurz and considerable research was done to attain the optimum angle of the case wall to maximize powder load and reliability.

Second, the cartridge case needed to have a 30 degree shoulder as this has been proven to be the most accurate shoulder angle in competition cartridges.

Third, the new cartridge had to fire a heavier bullet than those available for the AR-15/M16/M4 Family of Weapons to provide better terminal ballistics at greater ranges as well as having superior flight characteristics. 6.5mm/.264 inch bullets have shown to be superior for accuracy, flight characteristics and because of this, they have greater range than bullets of different calibers at similar weight. Therefore, 6.5mm/.264 inch bullets make an excellent choice for an intermediate cartridge.

Fourth, the case capacity needed to be as large as possible to push the bullet as fast as possible to increase the range of the AR-15/M16/M4 Family of Weapons.

Fifth, the parent case brass had to be readily available because nothing is more frustrating to a Reloader than not having access to brass because a new cartridge is based on a unique case or has a new case design that is difficult or impossible to attain. Unique brass also makes it difficult for the industry to accommodate a new cartridge and less likely to support a new cartridge. A unique case designs impair the entire firearms industry that you are trying to get to embrace your new cartridge as new actions, bolts and magazines have to be created to accommodate your unique cartridge in addition to your odd brass dimensions. Your unique cartridge design will be finished before it even starts if it doesn’t use common brass parent cases.

Sixth, this all had to stay within the dimensions of the AR-15/M16/M4 Family of Weapons, which established the physical limits of the design.

6.5 Kurz could be considered a shortened 6.5 Mauser cartridge with a taper to the case wall and this is why it was named Kurz as an homage to the 8mm Kurz, the original assault rifle cartridge for the STG44. Kurz is German for Short.

Once the design was drawn on paper, it was put in the program QuickDESIGN V 3.8.07 © 1987-2013 H. Broemel, Babenhausen, Germany. a cartridge design program that allows the user to create new cartridges in a simple CAD program. The design was then moved into QuickLOAD© H. Broemel, a reloading program. In QuickLOAD©, the first sets of ballistic data was created to see how the cartridge would perform.

The initial data was amazing to say the least as it was pushing a 120-grain bullet 2345 feet per second out of a 16-inch barrel.

This data was incorrect however because the pressure limits were set too low at 45,464 psi and could be boosted to 60K psi moving the bullet even faster.

The Reamers and Head Space Gauges were attained and sent to Wright Armory in Mesa, Arizona, so that construction of Rifles could begin.

The CAD drawing of the 6.5 Kurz Cartridge from QuickDESIGN© was sent to Hornady and Ben in their Custom Dies Department provided an education on forming brass for custom cartridges and 2 forming Dies in addition to a 3 Die Set in 6.5 Kurz were purchased. The dies arrived in 20 days.

Creating Cartridge Cases in 6.5 Kurz is a laborious process. See Fig 2. Although, the parent case is .308 Winchester/ 7.62 NATO, the shoulder of the cartridge occurs at the neck of 6.5 Kurz making case forming from the parent case challenging. 30-06 Family of Cartridges and 8mm Mauser based cases make a much better case blank to start with when forming 6.5 Kurz Cases.

First, the case is cut to length using a band saw. Then the case is well lubed and run through Forming Die 1 and 2 that brings the neck to about .284 inches. The partially formed case is then put in the case trimmer to bring it to a more precise length and create a uniform neck rim. The case is then put in the 6.5 Kurz Cartridge Die for final forming and then back in the case trimmer to be trimmed to proper case length. Because the neck has been formed from the case wall diameter of the cartridge, the brass has been compressed and now the neck is between .032 and .024 inches in thickness. If a cartridge were to be made from this case it would create a crimp along the entire neck of the cartridge, resulting in some very dangerous chamber pressures if fired. Therefore, each cartridge case has to have the neck hand turned to bring it down to .012-.010 wall thickness. QuickLOAD© provided load data to make a variety of rounds immediately available for testing.

Rifles for the new cartridge had been built, an AR-15, an AK and a Century C93. The AR-15 was completed first as this is the easiest conversion.

Rifle Number 1 had previously been a 6.5 Grendel with an 18” Barrel with a 1 in 8 inch twist rate, that was Reamed out to 6.5 Kurz, had a proprietary bolt and barrel extension added from a company that is no longer in business. The 6.5 Grendel cartridge had been frustrating too because it had feeding and extraction issues just like 5.56NATO AR-15’s in high use situations and it was because of the 6.5 Grendel’s straight case wall that these feeding and extraction issues had occurred.

At the range, Rifle #1 in 6.5 Kurz confirmed on the chronograph the data created by QuickLOAD© as shown.

Because the Rifle was built with proprietary parts from a company that no longer exists, continued development with this rifle was pointless and it now hangs in the workshop.

Rifle Number 2 is another AR-15 conversion from 6.5 Grendel and this one has done some amazing things and taught some valuable lessons.

Next was accuracy, and this was amazingly disappointing, as the target loads were all over the target. However, the spotter rounds that had been fired to verify the zero on the scope were a different matter, See Fig 3. This group of 3 rounds measured .365 inches and the bullets are .264 this means the 3 round groups is .101 between centers at 100 yards, almost 1/10th of an inch between centers at 100 yards! These were 100gr FMJ bullets that were hammer pulled from Wolf Grendel Ammunition and should not be that accurate having been previously seated in other cartridges and hammer pulled, potentially causing them to deform in the process. This group was simply amazing!

The extractor on the bolt broke ending the range session. This bolt was initially a 6.5 Grendel Bolt opened up from .443 to .473 inches on the bolt face and the extractor cut appropriately making the claw very thin. This bolt was replaced with a .458 SOCOM Bolt that has a .473 inch bolt face and all future AR Rifles will have a .458 SOCOM Bolt as this is purpose built for this size of cartridge.

This rifle has fired an additional, 100 rounds and has not had any loading or extraction issues related to dirt or carbon buildup in the chamber.

The initial gas hole was cut at the AK-47 size assuming that 6.5 Kurz was closer in dimensions to 7.62×39, however the chamber pressure of a 6.5 Kurz is 15K psi greater, so the recoil was abusive to say the least. The gas hole was welded and re-drilled to AK-74 size and now the rifle is pleasant to shoot.

Rifle Number 4 is a Century C-93 converted to 6.5 Kurz using a 6.5 Grendel AR Barrel that the Gunsmith did not appreciate doing. The amusing thing about the C-93 is that they are built with all Heckler & Koch Parts making them really good rifles. The chamber of the 6.5 Kurz is not fluted as the original STG45 chambered in 8mm Kurz did not have to be fluted, it was only when Heckler & Koch had to start making rifles with straight wall cases like 7.62 NATO and 5.56 NATO that fluting of the chamber became necessary and then they began to incorporate it in their rifle design to enhance reliability. Currently, this rifle is going through the process of finding the right roller/locking piece combination in order to get it to cycle properly.

Does the 6.5 Kurz meet the goals initially set out in the design parameters.

Yes, it is reliable, the elimination of the straight wall of the cartridge case facilitates ease of loading and extraction. The AR-15 no longer requiring a Dust Cover and Forward Assist.

It is accurate as shown by the group it has fired and continued displays of accuracy at the range.

6.5 Kurz does provide the AR-15 shooter with heavier bullets that will provide greater terminal ballistics at greater ranges than an AR-15 in 5.56NATO. Fig 5

Any weapon system that has been designed to fire 5.56NATO can be converted to fire 6.5 Kurz by a competent Gunsmith.

4 Round Grendel Magazines would be ideal for hunting holding 3 rounds. No feeding issues have been experienced with any of the 4 round magazines tested.

17 Round Grendel Magazines could not hold the rounds as they half stack because of their wider base. The magazine bulged at the side and would not fit in the magazine well.

The Ak-47/74 uses AK-74 magazines as previously stated, 17 rounds fitting in each magazine. No issues have been experienced with the Circle 10 Magazines tested.

HK93 40 Round Magazines hold 23 Rounds with a modified follower.

Currently there is no commercial ammunition available. Reloading data is available from Floyd Getchell by contacting him at getchellfg@gmail.com.

Dies are only available from Hornady Custom Dies Department 800-338-3220, ask for Ben. Permission may be required from Floyd Getchell by contacting him at getchellfg@gmail.com.

It is hoped that enough interest will be generated to have commercial cartridge cases made in 6.5 Kurz and eventually factory ammunition.

6.5 Kurz was designed by a combat veteran for reliability in combat situation, so that tactical problems could be resolved with the fewest amount of rounds expended to provide maximum effect on target at greater range in a light weight package without compromising accuracy. 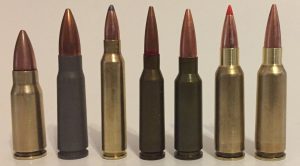 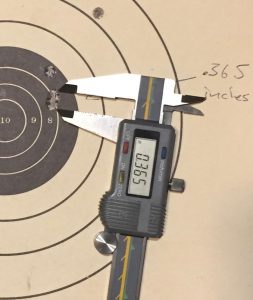 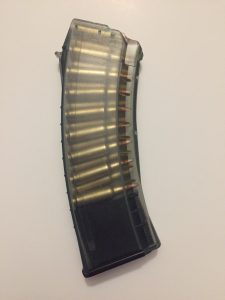 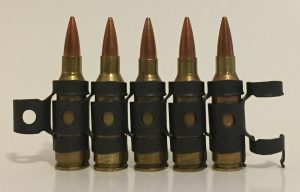 Fig. 6 6.5 Kurz Cartridges in M13 Links, ready for a SAW with a converted feed tray or a cut down M240 Machinegun.

The AR-15 that shot the really small group.

The HK93 in 6.5 Kurz that is going through the process of figuring out what roller and locking piece works with the new round. The AK47/74 in 6.5 Kurz with Magpul furniture. 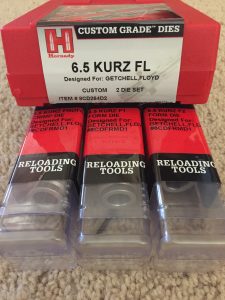